​Nutrients are divided into Macronutrients and Micronutrients on the basis of the quantities required by plants.

Macronutrients (major) are required in large amounts (i.e. grams of element per hundred grams of dry plant matter) and micro-nutrients (trace) in smaller amounts (i.e. micrograms of element per gram of dry plant matter).  Major and trace elements are also terms used to describe elements.  It is important to stress that both macro and micro nutrients are equally important for the growth and the functioning of plants.
Carbon (chemical symbol, C), hydrogen (H) and oxygen (O).  Plants use the green pigment (chlorophyll) in their leaves to convert sunlight into chemical energy.  The chemical energy is then used to synthesise carbohydrates (organic compounds) from the C in carbon dioxide gas and the H and O in water.
This reaction (called photosynthesis) can be summarised as follows:

Carbohydrates, and other organic compounds (e.g. proteins and lipids) contribute to the majority of increased plant growth; accounting for around 85-90% of plant dry weight. Particularly important plant compounds, the proteins, are made when the essential element nitrogen is chemically combined with organic carbon compounds.  For most plants (except legumes) nitrogen must be derived from the soil (Legumes are groups of plants which fix atmospheric nitrogen in the nodules formed in the root.  Nitrogen is just one of 15 mineral elements (in addition to the 3 organic elements – carbon, hydrogen and oxygen) essential for plant growth (see Table 2.1.1), that must be taken up from the soil water by plant roots.  For plant uptake of mineral elements to occur, the element must be in a water soluble form in order to pass from the soil, through the root to the growing areas of the plant.

The three primary nutrients in soil are NPK: nitrogen, phosphorus, and potassium. Despite the rampant use of chemical fertilizer, these can all be sourced naturally. Nitrogen can come from certain trees and plants, especially legumes, that have bacterial colonies on their roots that fix nitrogen into the soil. When the plants die or are pruned, the roots drop and release nitrogen beneath the soil for other plants, as well as atop the soil with their leaves and branches.

Phosphate, though deficient worldwide, is abundant in bird manure, including domestic birds, and there are also plants—palms and casuarina— that interact with fungi to fix phosphate into the soil. Lastly, potassium is readily available as it is present in all green material. Sea products, rock dust, manure, composting and vermiculture are all other natural ways of increasing mineral content and nutrients in the soil.

Soils hold onto nutritional elements in a way similar to the way they retain water: Positively charged nutrient molecules, cations, are attracted to the negative charges on the soil particles. The sites where cations attach to particles are cation-exchange sites Thus, clay retains more nutrients than coarser soils, just as it holds more water, because of the greater surface area (greater number of cation exchange sites) to which nutrients can adsorb. The ability to hold cation nutrients is called the cation-exchange capacity (CEC) and is an important characteristic of soils in that it relates to a soil’s ability to retain nutrients and prevent nutrient leaching.
​
Manures, compost, mineral accumulating plants, biochar all make good additives to creating composts that can be either applied directly or diluted into water to be applied as a compost tea.

Below are listed the macro and micro nutrients required for healthy plant growth in soils.

​Soils hold onto nutritional elements in a way similar to the way they retain water, with positively charged nutrient molecules, cations, attracted to the negative charges on the soil particles. The sites where cations attach to particles are cation-exchange sites Thus, clay retains more nutrients than coarser soils, just as it holds more water, because of the greater surface area (greater number of cation exchange sites) to which nutrients can adsorb. The ability to hold cation nutrients is called the cation-exchange capacity (CEC) and is an important characteristic of soils in that it relates to a soil’s ability to retain nutrients and prevent nutrient leaching.

Thus, clay retains more nutrients than coarser soils, just as it holds more water, because of the greater surface area (greater number of cation exchange sites) to which nutrients can adsorb.

​The ability to hold cation nutrients is called the cation-exchange capacity (CEC) and is an important characteristic of soils in that it relates to a soil’s ability to retain nutrients and prevent nutrient leaching. Salinity is another important chemical measure within soils.

​Measurement of the quantity and nature of ions adsorbed onto soil surfaces can help in the diagnosis of soil fertility problems.  These measurements, such as the chemical extractions of soil (soil tests), are commonly used to help determine fertiliser and lime requirements.

​This net charge on soil surfaces can be measured, thus the concentration of anions or cations adhering to the soil the net soil surface charge can be determined.  Most soils are found to carry net negative charge even though the soil will contain clay mineral and organic matter complexes that are both negatively and positively charged.  This means that in general there are more negatively charged clay mineral and organic matter surfaces than positively charged.

Absorption of Nutrients in Water

Mineral elements need to be soluble in soil water. When solubilised, they are present as extremely small particles called ions which are able to pass across the membranes of the plant root cells and enter the plant.  Mineral salts added as fertilisers are ionic compounds such as potassium nitrate (symbol KNO3).  These ionic compounds dissolve in water to form their component charged ions:

The ions separate in water because the polar nature of the water molecule (positively charged hydrogens and negatively charged oxygen making up the water molecule) acts to ‘pull’ the ionic components apart.  Each ion becomes surrounded with a cloud of oriented water molecules keeping them apart. The attraction between a polar water molecule and a nutrient ion is greater than the attraction of the two ions for each other.
soil water is the nutrient transport media. Often, less than 40% of the root surface directly contacts a soil surface.  Fortunately in a moist soil, the small gaps left between soil particles and between roots and soil particles is readily filled with water by the process called capillarity (the attraction of polar water molecules to electrically charged soil surfaces).  This thin soil water film acts as a sink for nutrient ions and connects the root surface with the soil mineral and soil organic matter surfaces which are the sources of nutrient ions.

In most temperate soils that experience more rainfall than evapotranspiration (thus causing drainage), the nutrient concentrations in soil water are very low
The table below shows the common range of important soil nutrients in New Zealand soils. 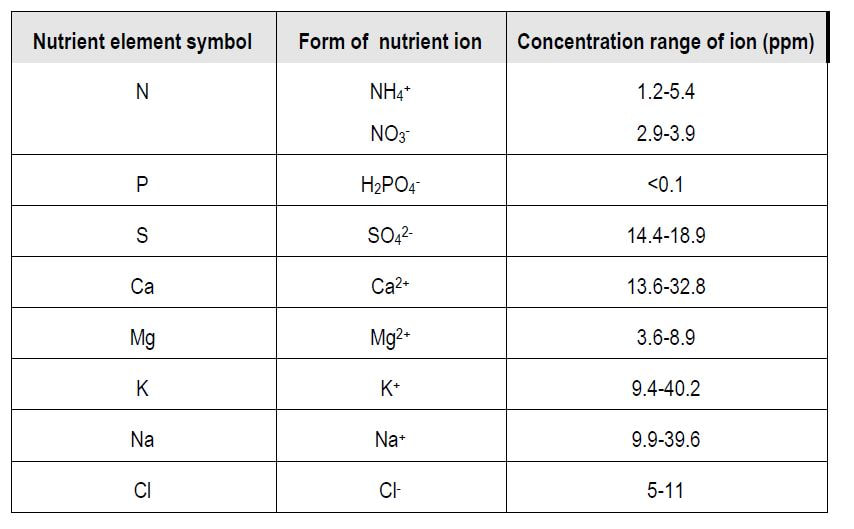 Soil pH, parts hydrogen, is mostly determined by a soil’s parent rocks. The scale centres on seven, which is neutral, becoming more acidic as the numbers get smaller and more alkaline as the numbers increase. Each number in the scale exceeds the previous number by the power of ten, such that a six pH balance is ten times more acidic than a seven but five is 100 times more acidic. As the numbers move outside of four and ten, the possibilities of life become remote. These can be brought back towards neutral by adding sulfur to alkaline soils and lime or dolomite to acidic soils. Humid places are usually slightly acidic, while new volcanic, coastal, and arid places tend to veer towards alkaline. Gardens generally function best at a pH between six and seven, though pH levels are not constant, adjusting with thing like rain and time of day.
​
Soil pH is perhaps the single most important aspect of soil chemistry. Strictly speaking soil pH is a measure of the number of hydrogen ions (H+) present in a solution. In more common terms, it is a measure of alkalinity and acidity. The pH scale runs from 0 to 14. Seven is neutral, 0 is the most highly acidic value possible and 14 is the most alkaline, or basic, value. Most plants grow best in the range of 6.5 to 7.0, which is acidic, but only slightly. The so-called acid-loving plants prefer lower pH, in the range of 4.0 to 6.0. Under 4.0, few plants are able to survive. Slightly alkaline soil is not harmful to most plants (except acid lovers). In strongly alkaline soils, however, nutrient-availability problems related to pH result.

The parent material of soils initially influences soil pH. For example, granitic soils are acidic and limestone-based soils are alkaline. However, soil pH can change over time. Soils become acidic through natural processes as well as human activities. Rainfall and irrigation control the pH of most soils. In humid climates, heavy rainfall percolates through the soil. When it does, it leaches basic ions such as calcium and magnesium and replaces them with acidic ions such as hydrogen and aluminum.

In arid regions (less than 20 inches of rain per year), soils tend to become alkaline. Rainfall is not heavy enough to leach basic ions from soils in these areas.

Adding sources of organic matter (such as manures and composts) acts to buffer pH and either reduce the pH of alkaline soils or increase the pH of acidic soils. Adding organic matter to soils therefore acts as a general remedy to improve pH.

Human activities that increase soil acidity include fertilization with ammonium containing fertilizers and production of industrial by-products such as sulfur dioxide and nitric acid, which ultimately enter the soil via rainfall. Irrigating with water high in bicarbonates gradually increases soil pH and can lead to alkaline conditions. In most cases changes in soil pH occurs slowly whether human-caused or natural. This is due to the tremendous buffering capacity (resistance to change in pH) of most mineral soils. An exception to this is high-sand-content soils, where buffering tends to be low.

Calcium, magnesium and potassium are cation nutrients, meaning they are available to plants in a form with a positive charge. Cations do not adsorb permanently to particles. Other compounds that are more strongly attracted to the cation exchange sites can replace them. This is one way that pH affects nutrient availability. Low-pH soils, by definition, have many of their cation-exchange sites occupied by H+ ions.

By default, exchange sites holding H+ ions cannot hold other cations. Therefore, low pH soils are more likely to be deficient in nutrients such as magnesium, calcium or potassium. If cations are not held by particles, they can leach out of the soil.
The pH scale 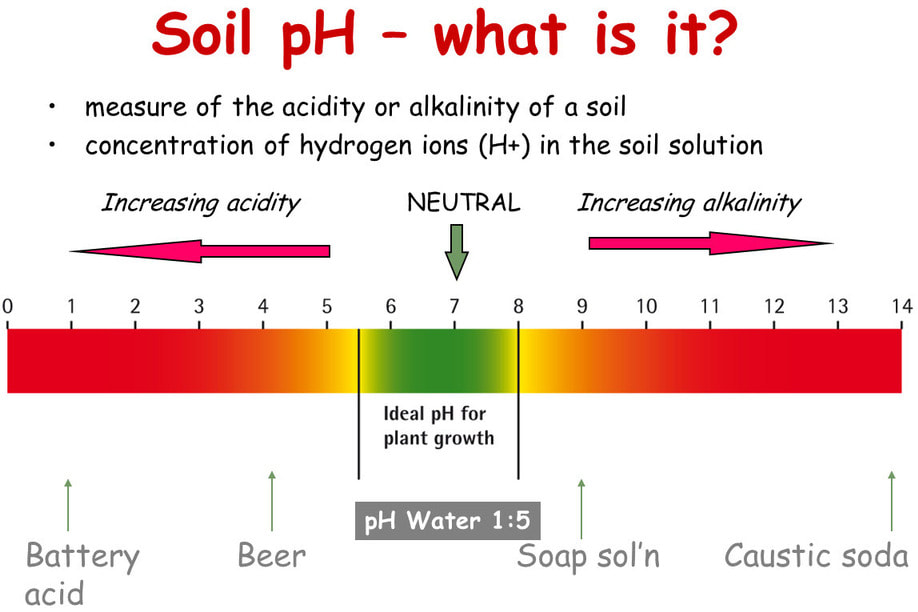 Impact of pH on nutrient availability. 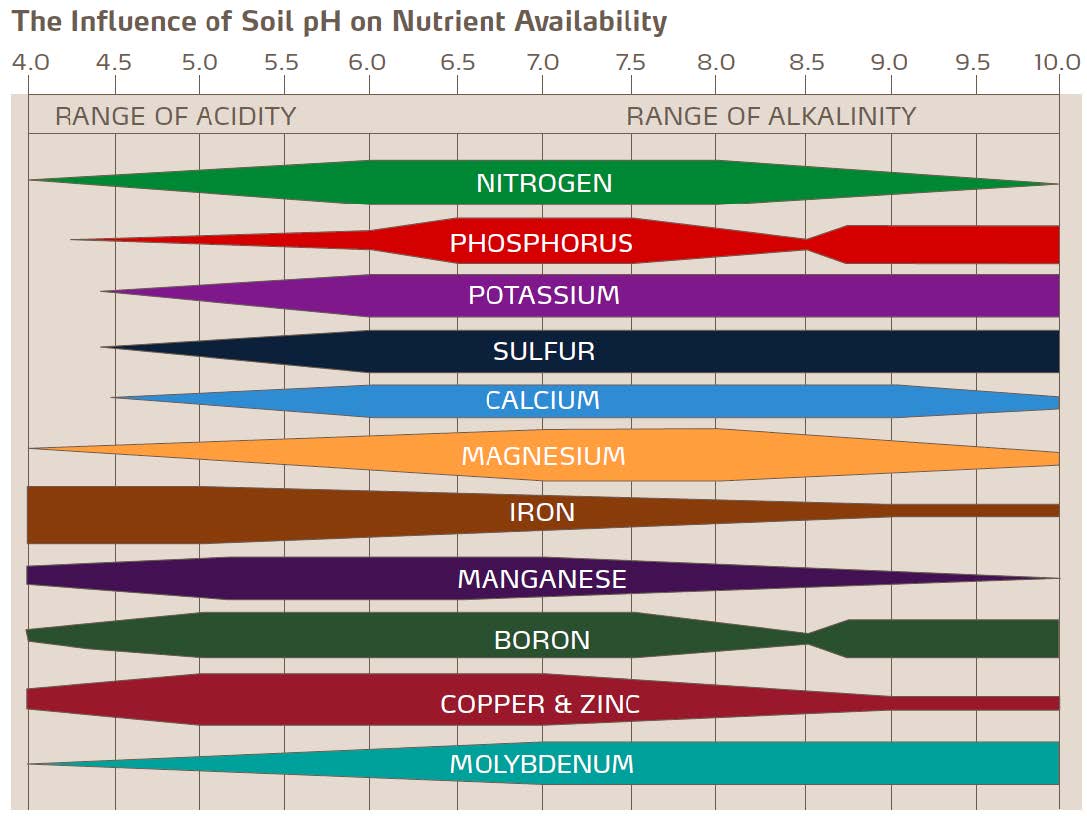 ​Salinity is another important chemical measure within soils. Some soils, particularly in arid regions, hold high levels of salt. Low rainfall prevents leaching of salts, so they build up in soils. Pan layers, common in arid regions, further inhibit drainage and leaching. Some fertilizers and amendments also can increase salinity.
Ecology Based Farming