​For a particular location, being familiar with the climate is one of the pillars behind creating an appropriate permaculture design. Some of the most important factors are rainfall, temperature, wind direction and wind speed.

​From interpretation of climate data a farmer can select the best animal and plant species for that region, which will thrive in those conditions and provide the best return on production.

​​Ocean Currents and their impacts Latitude (the distance from the equator) and altitude (height from sea level) are the two factors (along with distance from the ocean) that will determine how hot / cold an area is, the rainfall it experiences and hours of sunshine. At the equator there is an equal division of 12 hours of sunlight and 12 hours of darkness, with year round temperature of around 30 degrees Celsius.
​
With altitude (height above sea level) the air temperatures become increasingly cooler due to a decreasing density of gas molecules in the atmosphere. Weather can also become more extreme due to air being pushed up by mountains, cooling, and dropping water.

The adaptation plants have to these mid-latitude zones is very different to the adaptation of plants by the equator and plants increasingly have life cycles dictated by the seasons, with hibernating periods in winter, flowering in spring and fruiting in summer.
Distribution of Biomes Globally - as a consequence of patterns in climate and ocean and regional influence of surrounding landmass and mountain ranges. 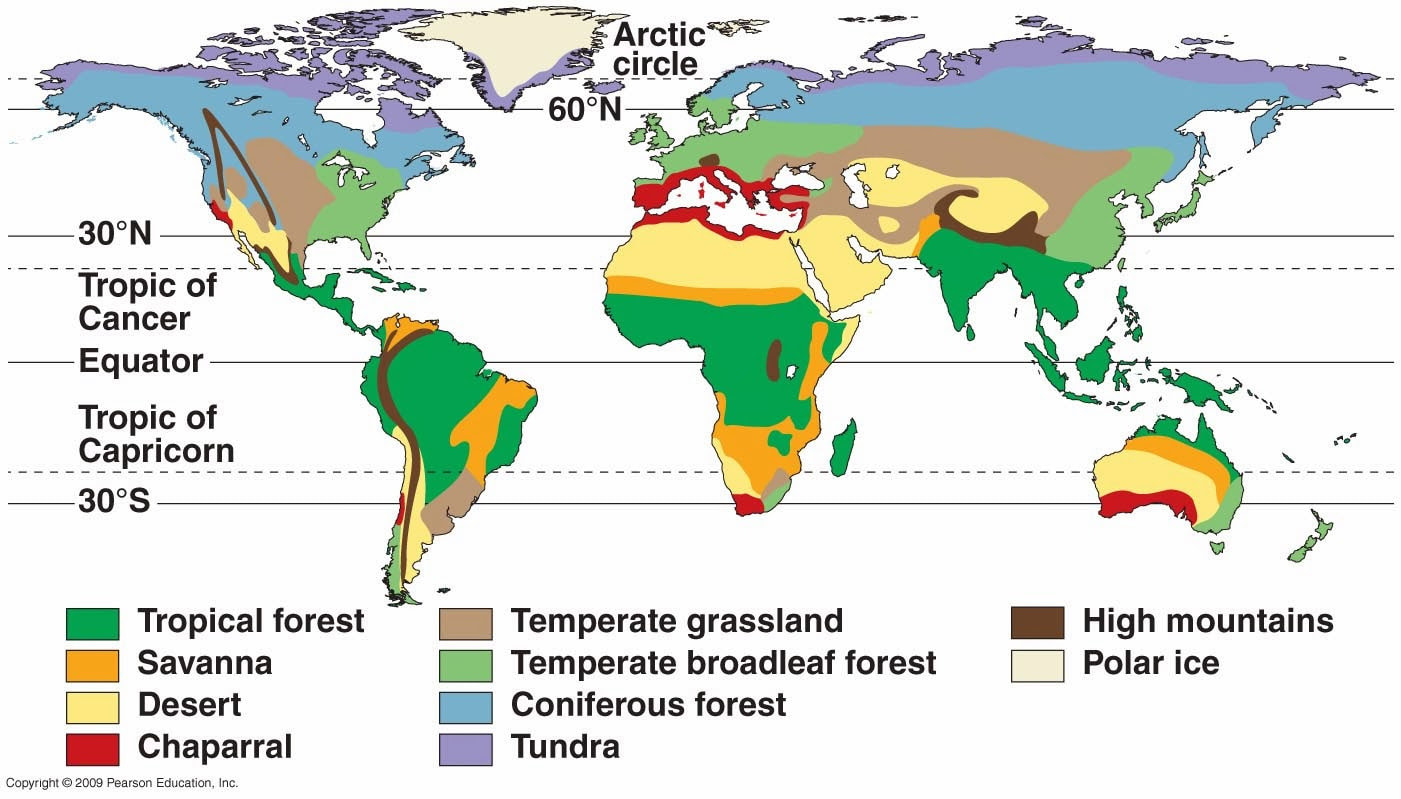 ​New Zealand's climate is complex and varies from warm subtropical in the far north to cool temperate climates in the far south, with severe alpine conditions in the mountainous areas.

Mountain chains extending the length of New Zealand provide a barrier for the prevailing westerly winds, dividing the country into dramatically different climate regions. The West Coast of the South Island is the wettest area of New Zealand, whereas the area to the east of the mountains, just over 100 km away, is the driest.

​Most of New Zealand is classed as a semi-tropical climate with fairly consistent rainfall throughout the year, but tending towards cold wet winters and warm dry summers. In some areas on the East coast of the North island this could be classed as a Mediterranean climate due north westerly winds in summer dropping a lot of rain before reaching the east coast, making this region dryer in summer.

For crop production some of the main considerations are average temperatures throughout the year and number of frost free days. Those regions of New Zealand with a relatively high average temperature in winter (around 10 degrees) with few frost (Auckland north) can grow many tropical and semi tropical plants. While regions with sufficient winter chilling will be good for production of many of the traditional European fruit and nut species (Hawkes Bay south).

The Wanganui region experiences on average 2-6 days of frost with a very temperate climate due to temperature buffering from the sea. This means that the temperature does not drop too low in winter or get to hot in summer. ​

Mean annual temperatures range from 10°C in the south to 16°C in the north of New Zealand. The coldest month is usually July and the warmest month is usually January or February. In New Zealand generally there are relatively small variations between summer and winter temperatures, although inland and to the east of the ranges the variation is greater (up to 14°C). Temperatures also drop about 0.7°C for every 100 m of altitude.

Sunshine hours are relatively high in areas that are sheltered from the west and most of New Zealand would have at least 2000 hours annually. The midday summer solar radiation index (UVI) is often very high in most places and can be extreme in northern New Zealand and in mountainous areas. Autumn and spring UVI values can be high in most areas.
​
Most snow in New Zealand falls in the mountain areas. Snow rarely falls in the coastal areas of the North Island and west of the South Island, although the east and south of the South Island may experience some snow in winter. Frosts can occur anywhere in New Zealand and usually form on cold nights with clear skies and little wind.